Random Dispatches from the Field

Blogging is all but a thing of the past. Probably a good time for me to start.

With 18 stamps in our passports in January alone, a healthy dose of malaria on the South Sudan/Uganda border, a revisiting of the site of the buffalo attack exactly a year later, a talk at the Giants Summit , some time spent at Duba Plains and a farewell to our Botswana president, it seems like I probably have enough to update everyone on.  Oh, I missed having two camps washed away…

As the title suggests these will be random dispatches, as I once sent back to the National Geographic Society whilst exploring, writing or filming over the past 35 years. I was often pressed for regular updates but when you are huddled in the back of a land cruiser for 27 days in torrential rain, to the degree where fungus starts growing on anything leather, including your body, regular dispatches fade away into the ‘less important’ category.

Last week as we sat with a couple of young lions at Duba Plains, we looked up and saw a strange shape across in the next island. I’ve filmed this dead tree a dozen times. I can virtually trace its outline in my sleep. Today it had a different shape. A huge male lion had managed to climb up, all the way to the top. The tree had blown down in the storms of 2006, so the wood is thin, brittle and is not something even I would attempt. 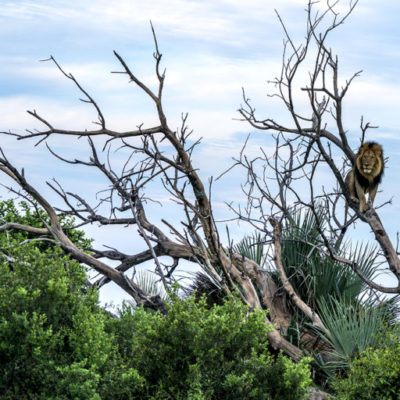 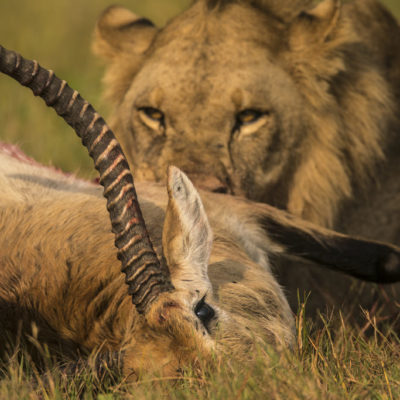 Once up, even turning around was an issue. Weighing at least 200kg he shivered and shook as he balanced unimpressively on a limb thinner than even one of his feet.  “This is going to end in tears.” I said to Beverly.  The pride moved off. The sky started turning pink, and an hour later and he was still boldly scanning around, but showing definite signs of discomfort. His first attempt at a descent went wrong, and he slipped, but found his footing and reversed, ass in the air.

He found something else unbelievably engaging with which to distract himself; a warthog half way across the Okavango, or perhaps in his imagination. Finally, he had no choice. I saw him puff himself up and start to come down, head first just like a leopard does. But leopards have the ability to tense up the tendons in their ankles and lock them, effectively doubling the size of these vulnerable bones. And they only weigh a third of this male.  I filmed and Beverly’s camera fired off dozens of images as he came down gingerly…

You know how sometimes you start something, like jumping off a vehicle roof or when you miss a step and your mind registers: “this is going to hurt” or frankly when a boxer goes through the ropes and looks up into the face of his opponent? I saw that look on the male’s face. And of course half way down it happened. His ankles bent, his weight shifted off centre and his massive head and shoulders swivelled around until he was hanging upside down over the spiky palms below.

He didn’t even growl. Who was to growl at? He’d done this all himself.

Then he let go, and crashed down breaking stuff, palms, skin, dignity.

After filming, I drove up quickly because I thought that he may have broken his back, then quickly backed away. He was sitting up looking around. I sympathised again. Those cartoons where small yellow canaries tweet around your head when you’ve taken a hit are real. I’ve seen them. So did this male lion at Duba Plains.

Duba Plains just does not let you down. In ten days we saw over 20 lions hunting and playing, chasing buffalo and killing lechwe, swimming and falling out of trees as we carved our way through fields of lechwe antelope. This begs a comment. 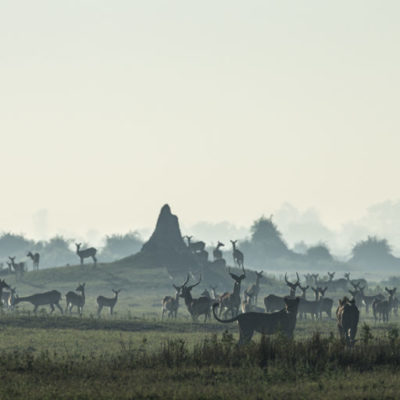 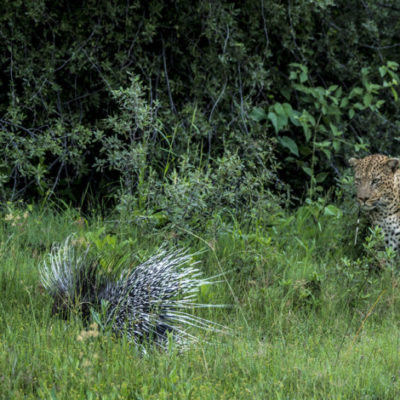 When we started at Duba Plains in 2003, I was aware of some lechwe around, as one would expect, on the fringes of the Okavango Delta. There were perhaps as many as 500, maybe more. But they were the fine detail in the incredible tapestry that is this place.

A year ago, we were with the former Botswana President (Ian Khama), and we stopped on a mound to search for lions. He said: “If I saw a photograph of this, I would be sure it was digitally enhanced.” He was right.  Seas of lechwe now flow across Duba Plains and last week I estimated that there are between 7, 000 and 10,000! It is like living in a permanent migration.

They part for us as we drive across the landscape and for the occasional warthog family that also seem to have proliferated, we now see families ‘herds’ of 15 or 20 warthogs racing around. Kudu herds have suddenly started popping up everywhere, and last week as we drove around an island a leopard had a wriggling porcupine in his mouth and claws. (It didn’t stay that way long, and the leopard was left nursing some stinging holes and pulling out long quills).

The lions don’t know what has hit them. They can virtually fall out of a tree onto something. And on top of that, in a week we saw lions climb trees five times.

Duba Plains has blossomed and like many, the summer, when it is almost Ireland-green, is best for this and this is the time I like it the most.