I visited Duba Expedition Camp this past September, and it was a great privilege to visit Duba Plains for the third time. Two years ago, in September 2014, I saw two complete buffalo hunts by two splinter groups from the Duba Plains Tsaro Lions over two consecutive days. One group used the stealth approach, following and stalking the buffalo herd from behind bushes and termite mounds, finally ending with a kill some six hours after it started. The second group of the Duba Plains Tsaro Lions consisted of two lionesses and one male. They took the aggressive approach. This one started first thing in the morning on airstrip, moved to the back of the camp, through the water channel in front of the camp, over the bridge, and across the plains on the other side of the water channel. The lionesses were fearless, staring down the buffalo lined up at the back, charging into them causing stampeding and panic. They would retreat as the big bulls pushed them back, then charge right back into the herd again. This went on for three and half hours, ultimately ending in a kill with the lions roaring those deep roars that penetrate your body and make the hair stand up on the back of your neck.

These were two of the most exhilarating and memorable two days I’ve ever had; particularly since I have followed the Duba Plains Tsaro Lions through Beverly and Dereck Joubert’s many films, documentaries, and books.

Then this past September when I visited Duba Expedition Camp, I brought several photos from 2014 to show my guide, Vundi. He immediately recognized the two lionesses who aggressively hunted the buffalo, one of which is named Floppy. He said that those two lionesses  now have three cubs each. Actually, three 9-month old sub-adults, and three 10-month old sub-adults. Needless to say, we spent my entire stay at Duba trying to track the Tsaro Pride.

We started tracking before sunrise, every day, and fortunately we were able to find them and then stayed with them until dark every single day. Even at times when they were sleeping, I loved simply sitting nearby, watching and being with them.

There were occasions where some of the pride tried to snatch a passing warthog, and gave chase to red lechwe. Early one morning, before finding the pride, we came across a dead kudu. There were no signs of a struggle or injury, so the best guess my guide Vundi had was that perhaps it was bitten by a snake. Later in the day, while sitting with the sleeping Tsaro pride, one lioness noticed a passing vulture that landed in the distance. When she saw a second flying the same direction and landing in the same spot in the distance, she sat up and continued watching very intently. Vundi then said that if she sees another vulture, she will follow. Sure enough, a third vulture flew over us, and as soon as it landed in the same spot in the distance, she took off after them. We quickly drove ahead to arrive at the dead kudu before the lioness arrived. She came running toward it, pawed at it, then nervously looked around to see if whatever killed it was still there. She then picked it up and carried it to a bush, and was soon joined by the second lioness and all of the cubs. It was a free meal for them all. 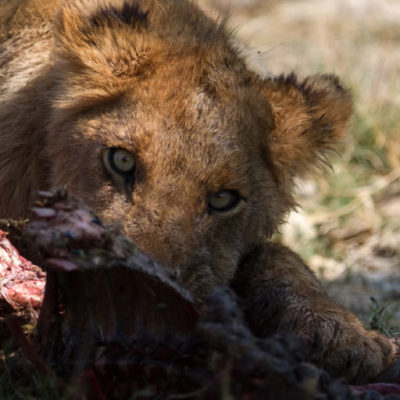 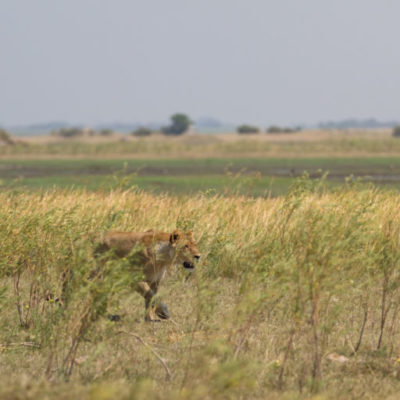 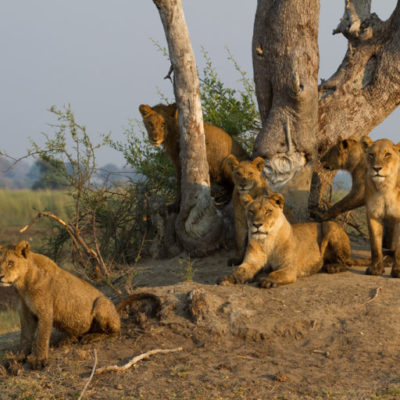 There were many other little stories and happenings that we captured simply by sitting with the Tsaro pride all day every day. But the most memorable occurred on the my last morning at Duba. We set off before sunrise as usual, and made our way to where we had left the pride the previous evening. However they were already gone. We tracked them as far as we could to a swampy area. The tracks became very confusing and were scattered over the area going in many directions. Vundi got out and walked around trying to figure out what had happened and which direction they ultimately headed. He took his best guess and we pushed on. We eventually came out into an open area where there was a small bachelor herd of buffalo. There were also two groups of red lechwe in the distance, both appearing to be watching something. The sun was just starting to rise, and there was a light mist in the air. Then we saw it. Shadows moving through the grass in the distance. It was the Tsaro lionesses, and they were stalking the red lechwe. There were several chases, but they missed each time. The herds escaped across the water channel and out of the Tsaro Pride’s territory.

The whole time, the buffaloes were just watching. After the red lechwes escaped, the lionesses turned their attention toward the buffalo, who then stampeded across the water channel as well. We were just sitting in one spot on the plain watching everything, and small mound with a single tree growing out of it was nearby. By this time, the sun was rising behind us. Having missed, the Tsaro pride was now walking single file toward this mound and toward us. It was a wonderful scene with beautiful light. And what happened next could not have been better if it was arranged. The two lionesses walked up to the middle of the mound and sat down looking in our direction, while all six cubs followed and took up different positions scattered around the mound and one even in the tree.

Both Vundi and I were in disbelief at the stunning beauty of the scene, made even more special because this was the Tsaro pride posing for us. It was as if the Tsaro lionesses were sharing their cubs with us for a family portrait. It was a very memorable fifteen minutes that I will relish for a very long time. I hope that it finally portends a successful future for the Tsaro pride, and that the vaunted Tsaro pride rises again.
I’m thrilled that Great Plains Conservation has decided to keep Duba Expedition Camp open in addition to the remodelled Duba Plains Camp!! I love Duba Plains simply for the stunning wildlife, but I also have to say that the guides, camp staff, chef, and manager at Duba Expedition Camp were absolutely top notch and clearly cherish the magnificent land and wildlife around them. During our full days out, the chef even delivered lunch to our vehicle so that we could stay with the Tsaro pride and not risk losing them. Thank you so much for another fabulous and memorable stay at Duba Plains! I hope to return again some day to see how the Tsaro pride progresses.

All the best,
Chris Swindal 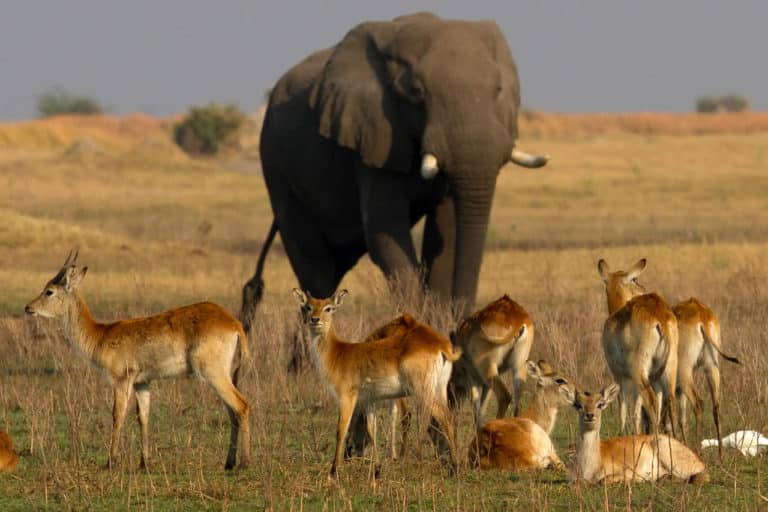