Oh, Okavango! The Whys & Whens of a Botswana Delta Safari 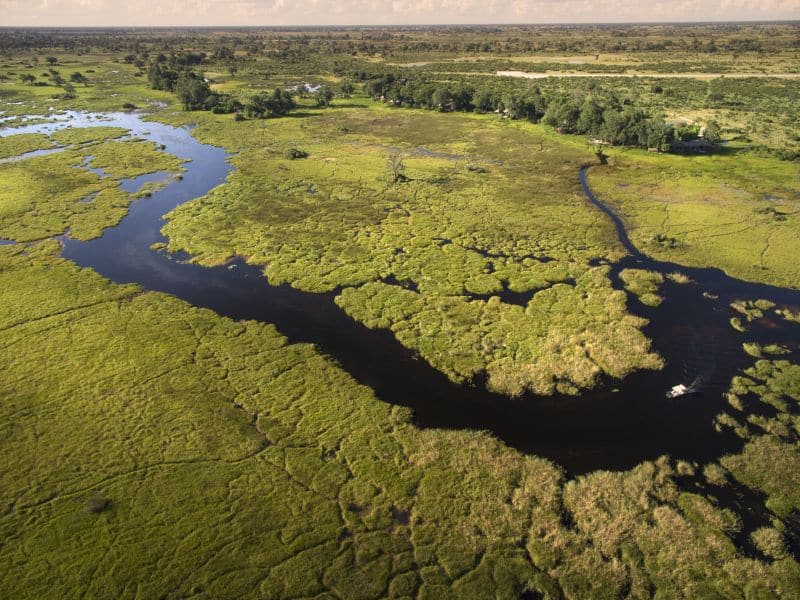 A bloat of hippopotamuses, a memory of elephants, an obstinacy of buffalo, a pride of lions, a bask of crocodiles, a pack of wild dogs, a tower of giraffes, a crash of rhinoceroses, a cackle of hyenas, a dazzle of zebra, a confusion of wildebeest, a troop of baboons and 99 species of dragonfly.

These are just a tiny part of the larger picture, a few of the pieces in the jigsaw puzzle that is the Okavango Delta in north-western Botswana. The largest inland delta in the world. A natural maze of canals, riverbeds, waterholes, lagoons, swamps and bogs that all vary in size and shape, as the waters of the Okavango River follow the seasonal whims of nature. 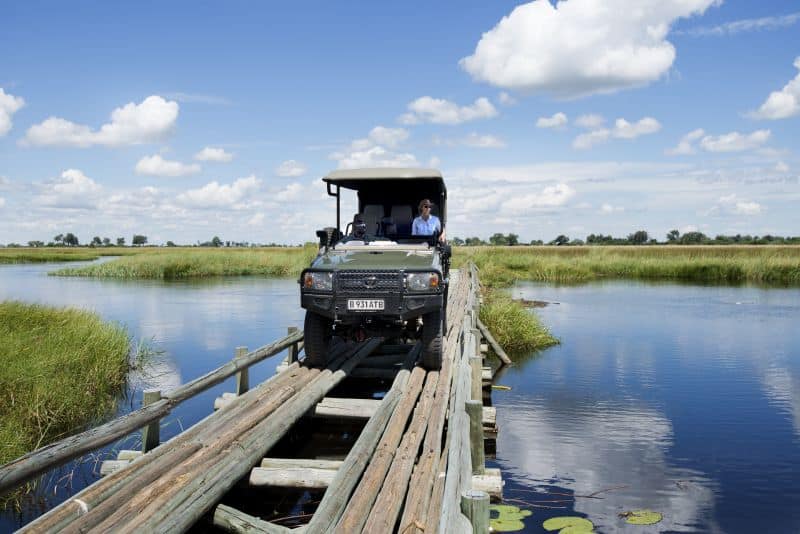 The best time to visit

Seasonal transformations are a way of life here. Rain falls and then it doesn’t, the hot African sun blazes down and bakes man and animal alike. The grass is thick, lush, verdant, packed with nutrition and over-run with creepy-crawlies. And then it isn’t. Each and every moment is of the utmost importance and must be savoured. It is never too hot or too cold, it is always just right, it is always the way it is meant to be.

The Okavango Delta is produced by seasonal flooding. The summer rainfall from the Angolan highlands arrives in March and the waters spread out across the delta over the course of the next four months (March–June).

By May, the summer rains have stopped and the vegetation starts to dry out, but the floodwater will take months to filter through the delta. Animals move from the outlying areas to congregate in greater numbers at permanent water sources, making them easier to spy on drives through the wilderness. 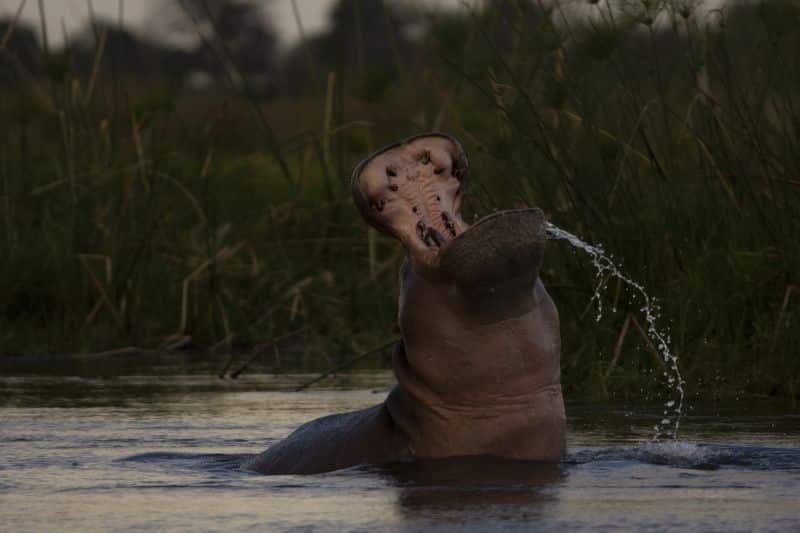 The flood peaks between June and August, during the dry winter months, when the delta swells to three times its permanent size. More animals gather from kilometres around, creating one of Africa’s greatest wildlife experiences. Cheetah, white and black rhino, African wild dog and lion, roaming together in one place.

Between March and August, daytime temperatures are still pleasant, but August is a particular favourite for travellers, as temperatures are at their mildest. The temptation of slipping through the labyrinthine canals in a mokoro is even greater with the delta at bursting point.

September arrives with the end of winter and temperatures begin to rise and water levels drop. 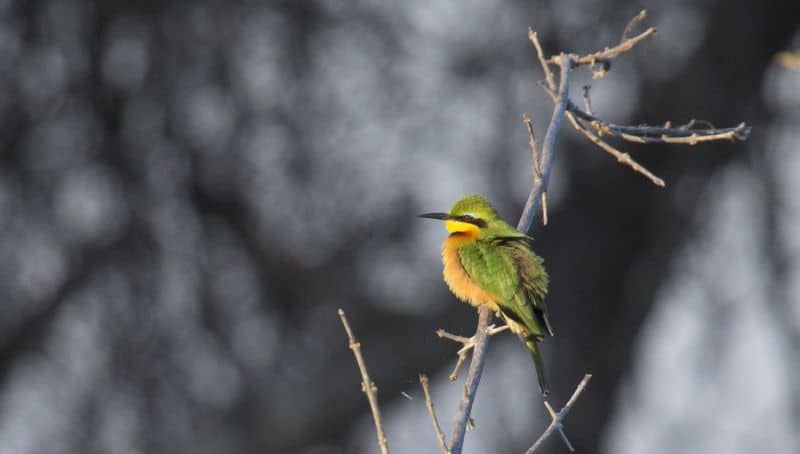 A season of new life

In the Okavango, everything is food, every blade of grass and tender young leaf, every bug that crawls or flies, every impala and lechwe and even the fearsome king of the beasts. The menu is studied, orders are placed, it’s just a matter of time.

The rainy summer season begins in mid-November at the Delta and continues until February. During November the weather is warm to hot with the characteristic late afternoon summer thunderstorms releasing their life-giving rain. Wildlife babies arrive en mass, plants regenerate, insects hatch and there is an abundance of food. The time is right for the antelope to give birth, for baby warthogs and African buffalo youngsters to feed on the fresh shoots. 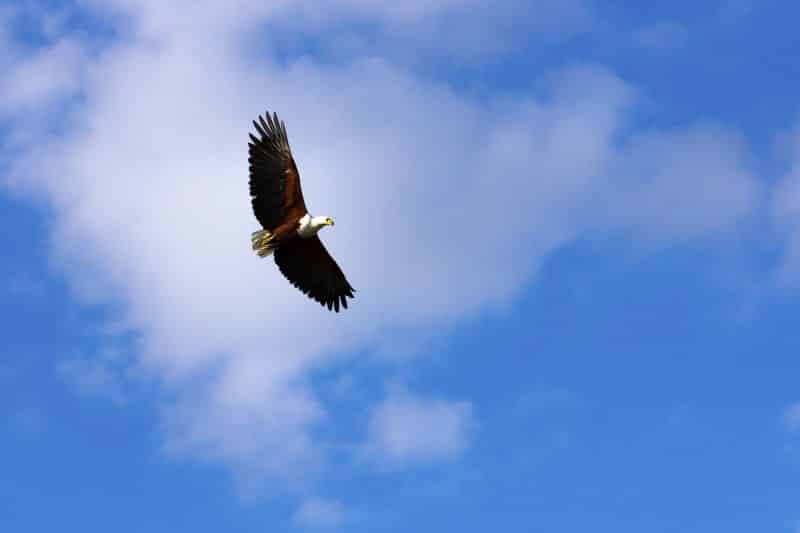 With plenty of easy-to-catch baby antelope about it’s also a good time for hungry leopard, lion and cheetah cubs. Hyenas and vultures feast on leftovers and nothing goes to waste.

Birding safaris are mostly undertaken in the summer months, but with 500 species of bird in the delta, beautiful sightings happen all year-round. Many birds leave their northern hemisphere homes for warmer weather and the opportunity to have their fill of African delicacies. Truly a birder’s, or should we say twitcher’s, paradise. 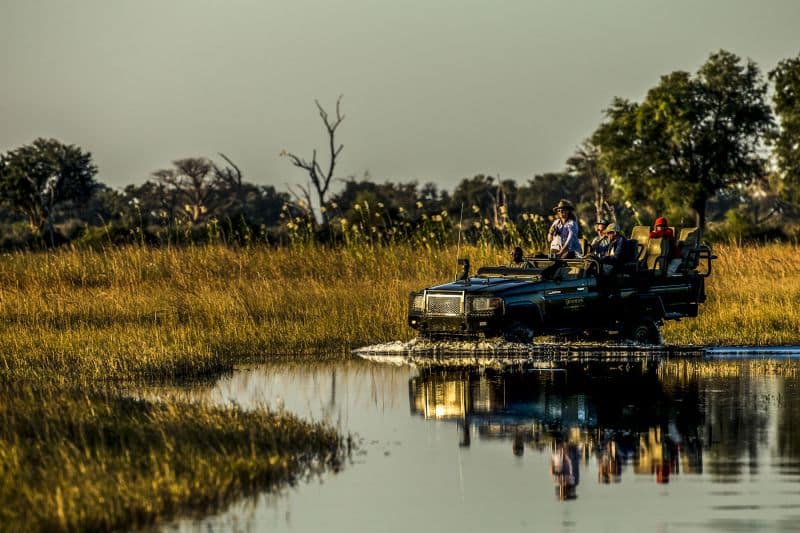 Once upon a time

Most rivers share a humble beginning. Rain or meltwater trickles and seeps down slopes, following natural cracks and folds, always seeking a way to the sea. They create small streams which join up with other small streams, growing all the while and becoming more powerful, smashing their mighty way even through solid rock.

The Okavango River is no different. It begins its journey 1600 km away in Angola. The Rio Cubango and the Cuito River converge to form the Okavango River as it leaves Angola and passes through Namibia, on its way to Botswana and the Kalahari desert.

It is here that the plan goes awry. Instead of carving gorges through mountain ranges, plummeting from great heights to form waterfalls and tumbling over water-smoothed rocks, the river simply stops. 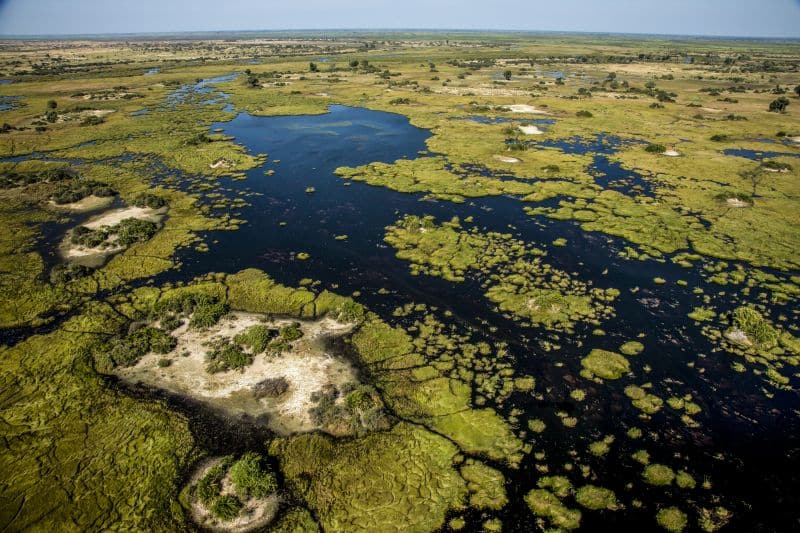 Geologists generally talk in millions when discussing the formation of geographical features but in this case, it was possibly less than 100 000 years ago that the pushing, shoving and general jostling for position of the Earth’s crust changed the course of water destined for Lake Makgadikgadi in the south.

Geologists theorise that the rivers from the Angolan highlands originally flowed into this giant lake, but due to various geographical movements they were re-routed to flow into a large, generally flat, and slightly sunken area. And so today we witness this dried-up lake, known as the Makgadikgadi salt pans, and the cul-de-sac that is the Okavango Delta. One a desert and the other an oasis. 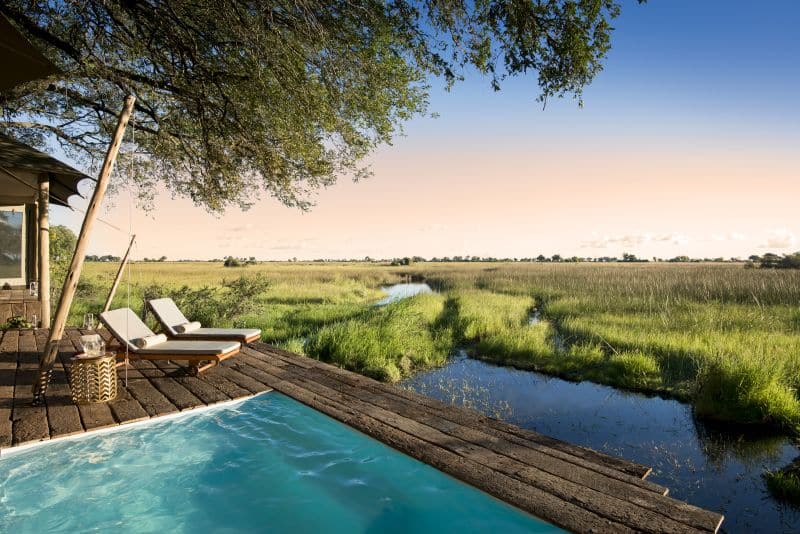 Your base in Eden ~ Duba Plains Camp 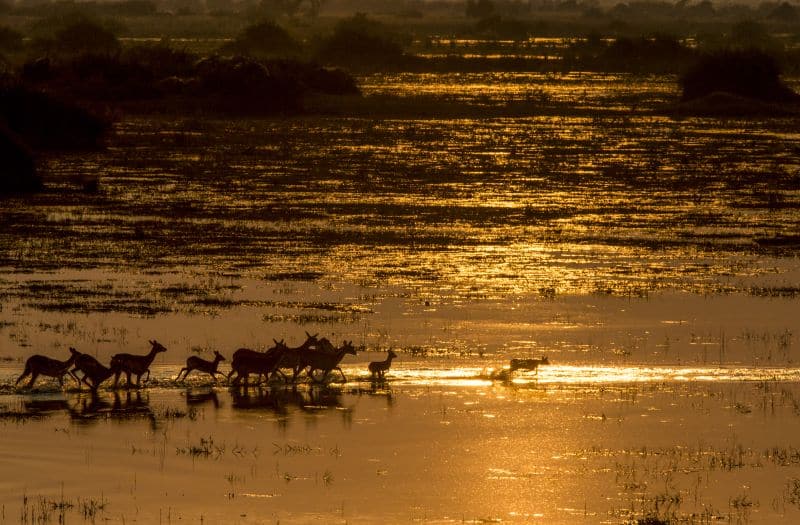 Living in knee-deep water isn’t for everyone, but for the delta’s red lechwe, marshy areas are their preferred habitat. They munch aquatic plants and consider the water to provide protection from predators. Their legs are covered in a water-repellent substance that gives them a leg-up against their predators.

One of those very predators is the lion and they have taken to water like ducks. Not your average water-shy feline, they are said to be the biggest lions in Africa due to the abundant prey. They appear to be rather content with a swim and a splash if it’s in a good cause. 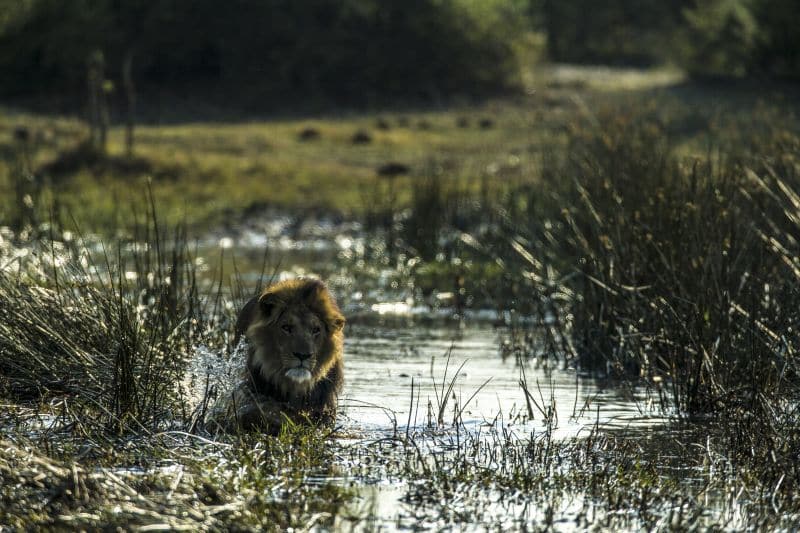 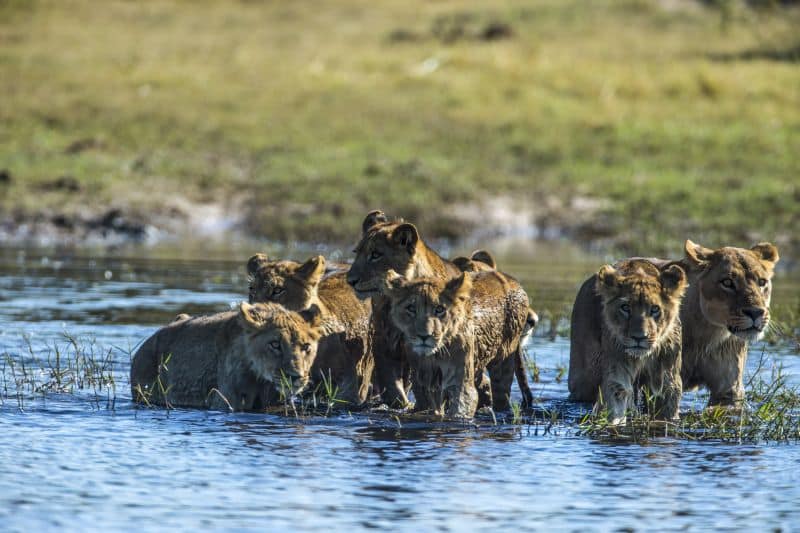 The Okavango Delta and hippos are synonymous, a match made in Eden – what with the abundance of tasty grass and water of varying depths to suit hippos’ semi-aquatic lifestyles.

A pod or bloat reaching up to 30, with each hippo weighing over 1300 kilograms, these animals’ path-making skills help to shape the delta. They simply shoulder their way through any obstruction down below, creating new canals that, in turn, allow the flood-waters to go where no water has been before. The altered water-flow breaks down existing islands and forms new ones. All part of the constantly changing delta.

We humans have our own adaptation… the mokoro. This local dugout canoe lets us paddle through the channels, with the waterlilies and passages of papyrus. Come eye-to-eye with those dragonflies, while evading the stomp of a hippo or muddy lions. But perhaps you’ll prefer the comfort of four wheels… 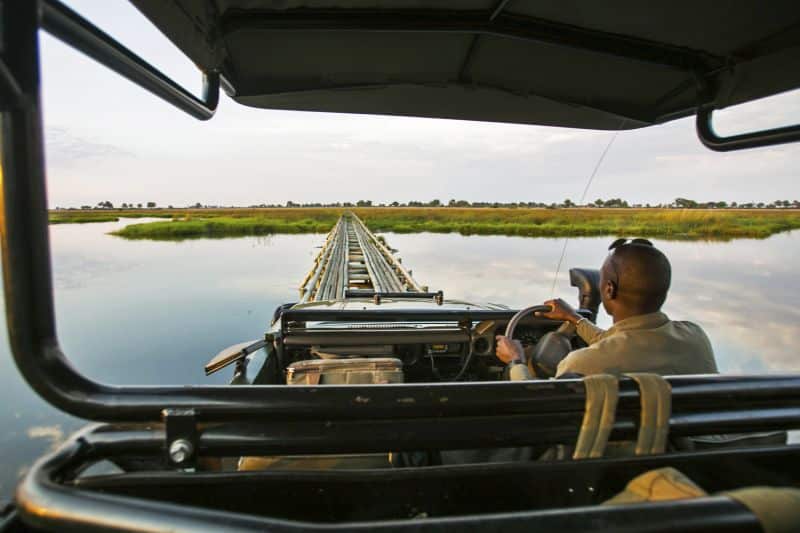 Whether Duba Plains Camp or Duba Plains Suite, tucked away in the 33,000 hectare Duba reserve which is located right where the flood waters spread out into that of the Okavango Delta, a place that Great Plains Conservation co-founders, National Geographic filmmakers, conservationists and explorers, Dereck and Beverly Joubert, chose for their home base, or Duba Explorers Camp, on an island in the northern reaches of the Duba concession.