The Curious Case of the Wild Dog 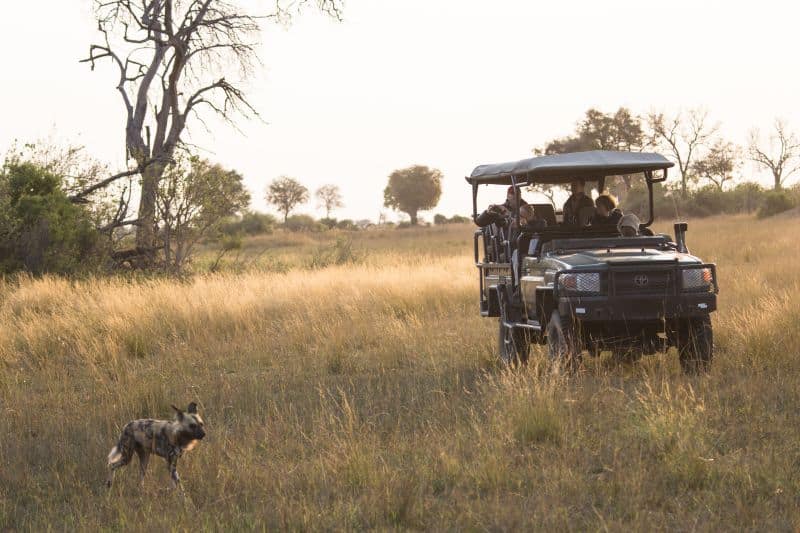 African Wild dogs were once found across Africa, but today they exist in mere pockets of endangered packs.

In areas such as the Selinda and Okavango in Botswana and Maasai Mara in Kenya, we have actively taken to restoring ecosystems around our camps to provide these animals with a space that protects Wild dogs from threats like loss of habitat and human-wildlife conflict. While their bark has been greatly diminished in the great chorus of the continent, these animals are an important and fascinating part of the natural world.

After hundreds of years and many name changes, it appears that we are no closer to reaching a consensus on what to call a “wild dog”. Even its common names are the subject of debate.

With it called the African Wild dog, African hunting dog, Cape hunting dog, painted hunting dog, painted dog, spotted dog, ornate wolf, painted lycaon, as well as the painted wolf, many conservationists feel that it is in need of rebranding. What is certain is that its coat is a work of art, and it lives in Africa – seen across our camps in Kenya and Botswana. 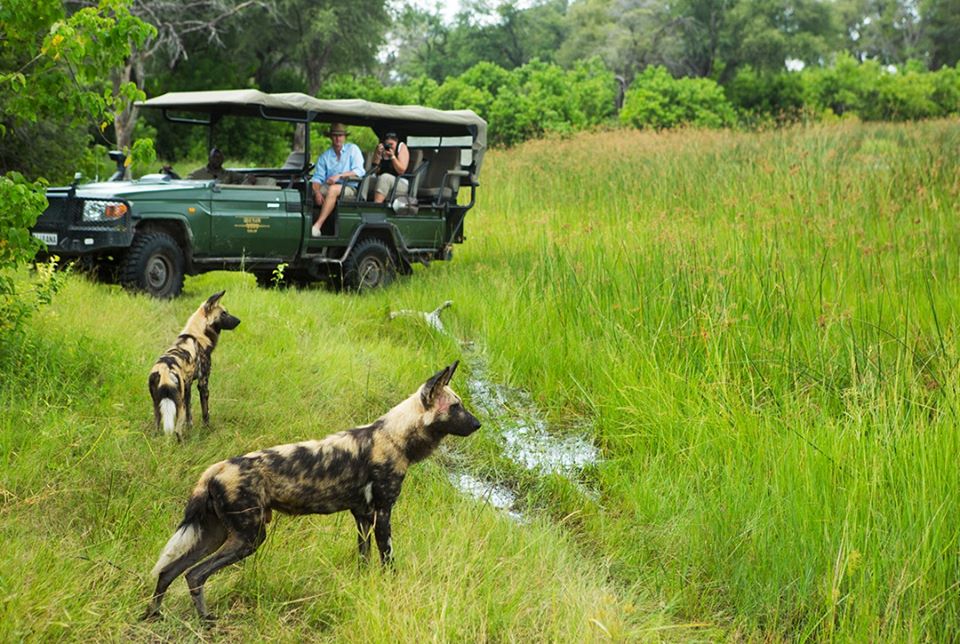 Where the Okavango fans out into a delta, flooded swamplands become an ideal hunting ground for a fearsomely accomplished predator: the African wild dog.

The wild dog is neither wolf nor a dog.

It is the only extant member of the Lycaon genus and goes by the name of Lycaon pictus. It’s easy to tell it apart from wolves and dogs by its teeth that are specialised for a hyper-carnivorous diet, a lack of dewclaws on the forelimbs, one of the most varied coat colours among mammals, ears like satellite antennae and an incomparable joie de vivre.

Native to sub-Saharan Africa and the largest indigenous canine in Africa, Lycaon pictus shares a common ancestor, over two million years ago, with the wolf, in much the same way that we share a common ancestor with chimpanzees, some eight million years ago. The wolf lineage split and evolved into today’s domesticated dogs, while the Lycaon lineage evolved into the present-day painted dog. 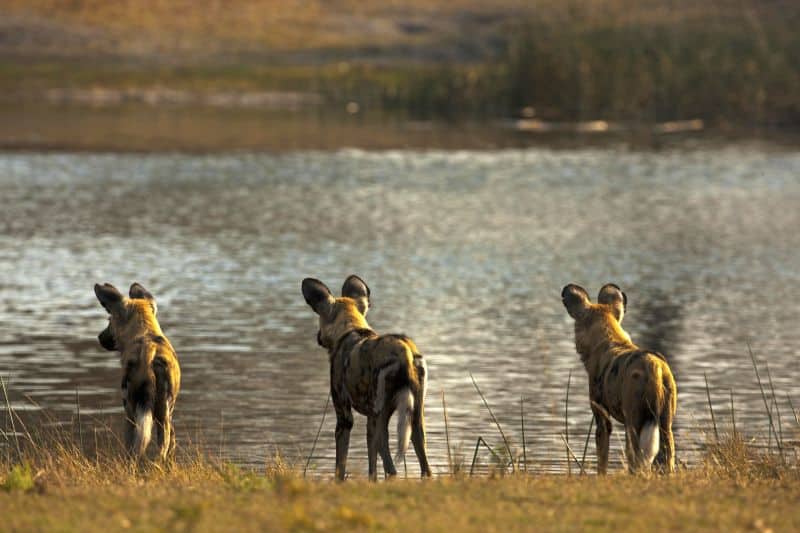 In Greek mythology, Lycaon was a king of Arcadia who served roasted human flesh to Zeus, the ruler of all the gods on Mount Olympus, to test his all-knowingness and ability to discern that it was not the meat of an animal. Zeus proved his omniscience and, as punishment, transformed Lycaon into a wolf.

Pictus means painted. The wild dog was originally mistakenly classified as a hyena and given the genus and name Hyaena picta until it was recognised as one of the canids and renamed Lycaon tricolour, and later Lycaon pictus. At least we’ve settled on a scientific name for now. 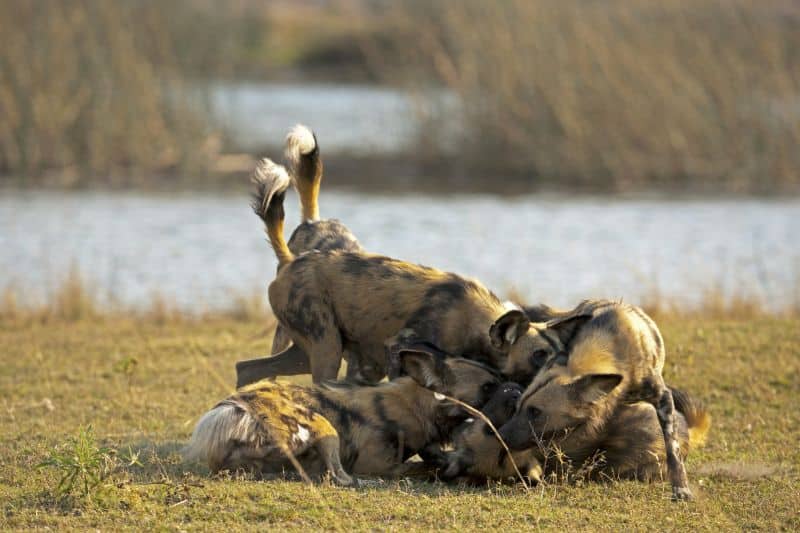 “Some studies show that up to half of all wild dog deaths can be traced back to human action, whether it’s snaring or road accidents or retaliatory conflicts with people in increasingly encroached-upon landscapes.” – Dereck Joubert.

Individually, they’re no great hunters, but when in a pack, wild dogs are genuinely formidable.

They are the closest Africa gets to having piranhas, as they can ‘hoover up’ an impala in 20 minutes. Their hunting strategy seems to be based on being everywhere at once, a set of nipping, ripping and tearing teeth at every turn. The pack can keep up with the fleetest of grazers and eventually take advantage of any weakness.

They often kill their prey by disembowelling, leaving them to die through shock and blood loss. Lycaon pictus has the highest bite force relative to the animal’s mass of any existing mammal carnivore, with their scissor-like molars used to devour the prey before any scavengers come along. Lions and hyenas are their sworn enemies. 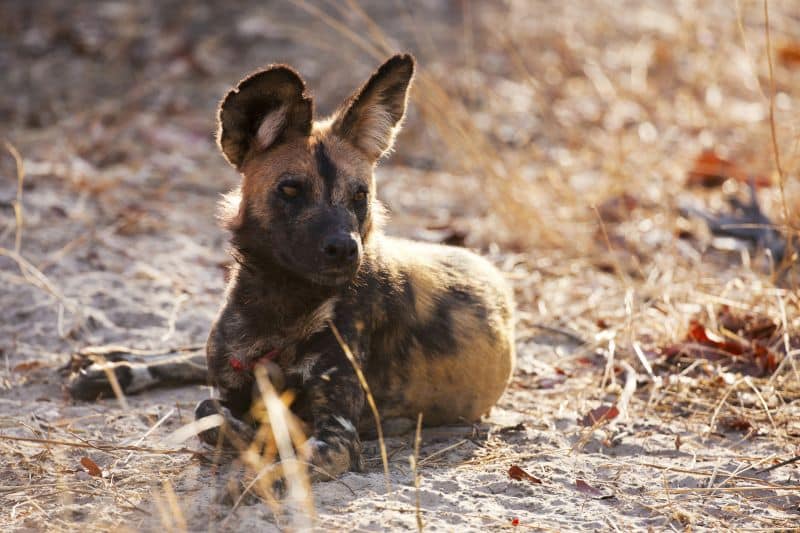 These painted predators live in packs that are dominated by a monogamous breeding pair and that include their offspring and other non-breeding adults who are either offspring or siblings of one of the breeding pairs or of the previous alpha pair. One big happy family. The emphasis is on happiness because there is rarely any internal fighting and leaders are not chosen because of dominance but rather through their ability to raise their litters successfully. 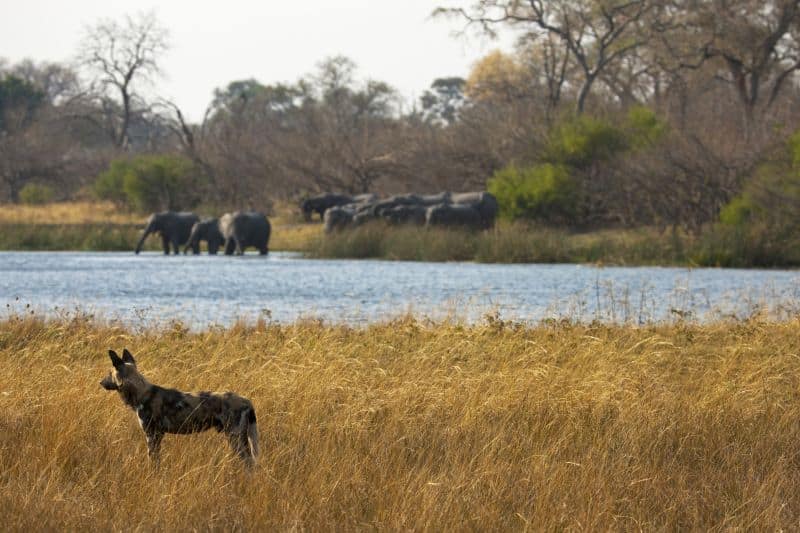 The average litter is around ten pups and is frequently housed in the safety of old, deserted aardvark burrows. Unusually, it is the young females who leave to find another home in a pack (one that lacks sexually mature females) while the males remain.

The vocalisations of this painted wolf-like African hunter go well beyond that of a domestic dog. They greet each other with high-pitched twittering and whining sounds, and when one dog has lost the group, it will make an owl-like “hoo” call to find the pack. 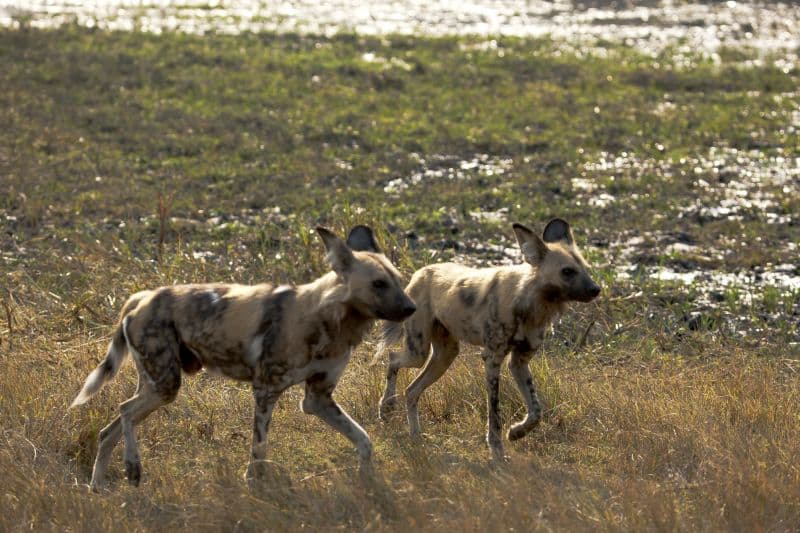 “A sight like this certainly warms our hearts and reminds us that our conservation-focused approach to wildlife tourism is having a positive impact on imperilled species.” – Beverly Joubert.

Researchers in Botswana have noticed an unusual sneezing behaviour before the pack leaves for a hunt.

Nobody knows whether roll call or just nerves, but it is conjectured that it is a form of democratic voting. Very few animals are more enthusiastic and unrestrained than painted wolves preparing for a hunt, with their raucous geeing up consisting of bowing, jumping, tail wagging and sniffing and perhaps some of that sneezing to get the adrenaline flowing.

The wild dog’s main prey is impala, Thomson’s gazelle, springbok, kudu, reedbuck, and wildebeest. However, being opportunistic, they also add ostriches, baboons, zebras, warthogs and the calves of other large and dangerous prey, such as the African buffalo, giraffe and eland, to their menu. 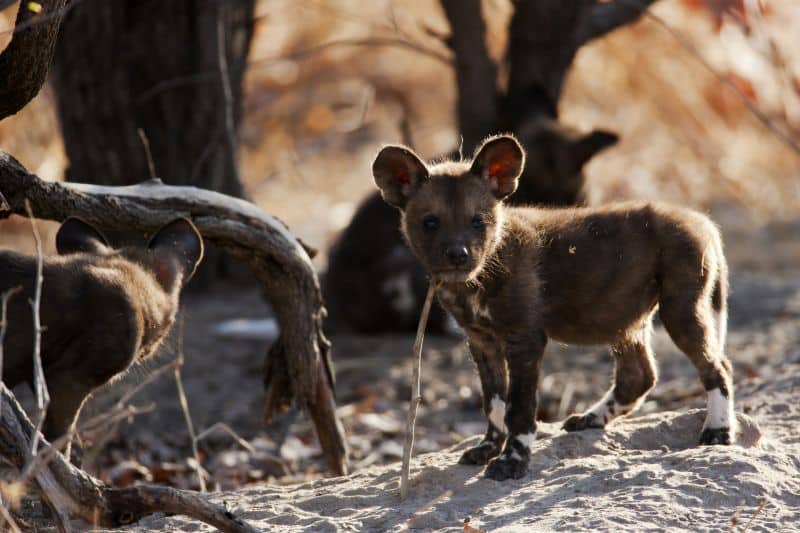 At Zarafa Camp, we can see the beautiful rewards of revitalising this conservation area with young painted dog pups enjoying a spot of fun.

If puppies are sick and injured, they will remain behind and when the pack returns from the hunt, these dogs will request food from the returning hunters by grinning, nudging and nibbling their lips, licking their faces and generally saying ‘please’. Regurgitated impala is most certainly a favourite. 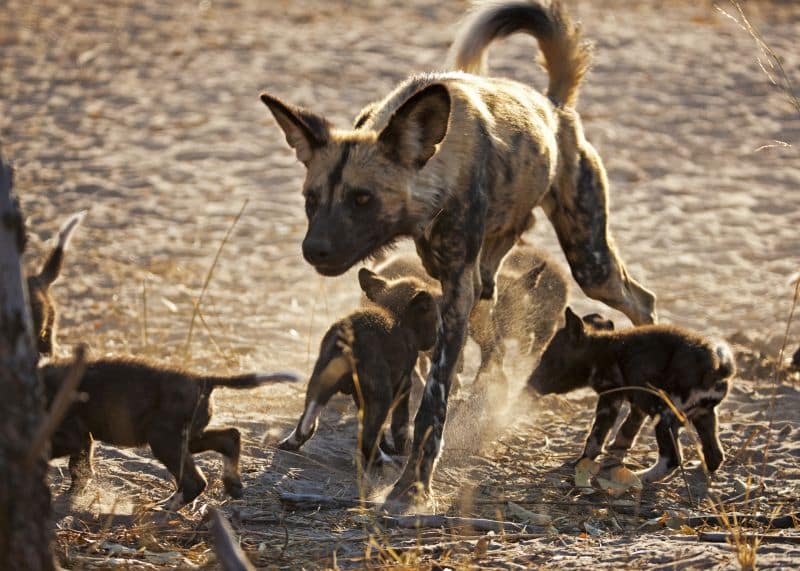 Great Plains Conservation has worked to restore and protect vulnerable and vital ecosystems across Africa, enabling the essential flourishing of wild animals such as wild dogs.

Wild dogs are an indicator species of a healthy ecosystem.

At first glance, the value of predators in any environment might be an unpleasant concept, and African wild dogs, with their gory killing strategy, don’t help. But their weeding out of the sick and weak is essential to control the spread of disease. Their predation helps to regulate the impact of ungulates on the ecosystem and the bio-mass in a process called “trophic cascade,” and by so doing, creates and preserves the habitats of a diverse and vast selection of animals and insects. 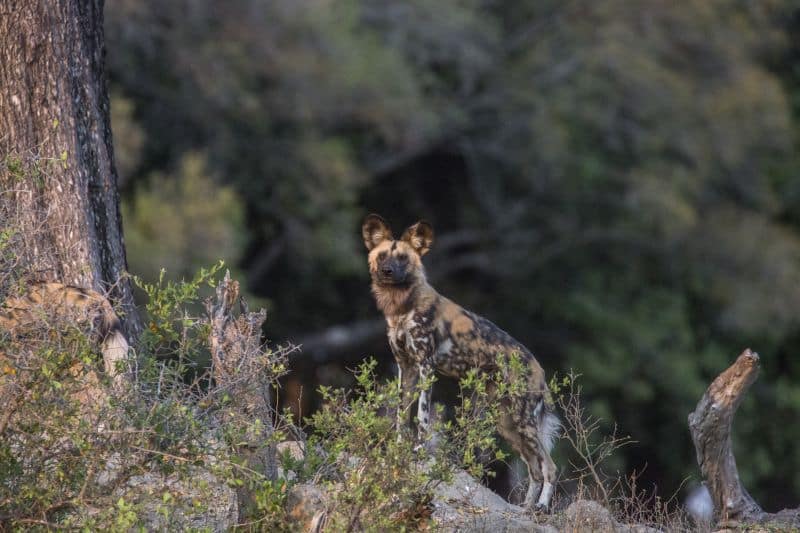 The fate of all wildlife depends on wild dogs and their value to the surrounding communities and we need to be stressed.

These unique animals are worth more alive than dead, and part of their ‘rebranding’ from wild dog to painted wolf stresses this. They are not dogs, will never be domesticated, and will never serve us. Still, their value to both the ecosystem they find themselves in and the enrichment of the lives of travellers is immeasurable.

Watch a few wild dogs in motion with these clips captured by Dereck Joubert:

A scene from Okavango: River of Dreams

One of the planet’s most endangered carnivores