By GreatPlainsCons7th Apr 2021May 25th, 2021Watch Wednesday
No Comments 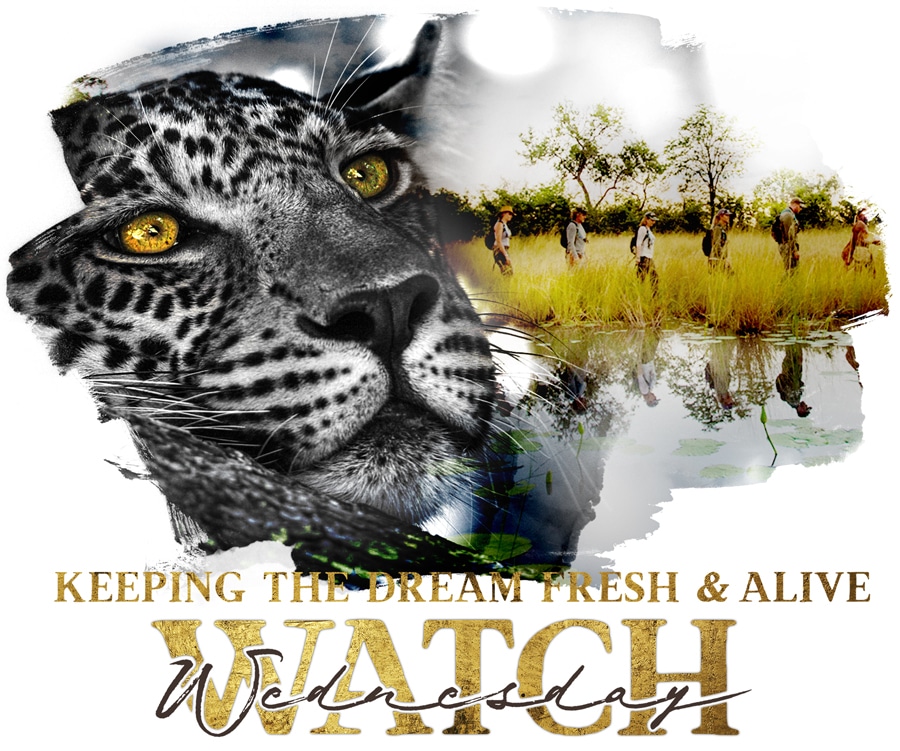 The very origin of safari is based on a journey. Of expeditions.

When we first went to Botswana, it was for a safari down the Okavango in mekoro (dugout canoes.) It was about following the water. Later on, it was about surveying hippos or elephants, finding new lions, or painted dog dens. It was that sense of exploration.

I was seven when I first went on an expedition, deep into Tete Province in Mozambique, with my father as he surveyed a railway line. His crew had spotted a leopard the morning we arrived, and the off-white tents flapped gently in the welcoming breeze. We saw a Trumpeter Hornbill flying impossibly above us, fighting against the weight of his huge bill and crying like an abandoned infant. I think from that moment on, I was hooked on this lifestyle. I loved everything about it. Years later, as Beverly and I were inaugurated as two of only 12 National Geographic Explorers at Large, we were asked how it all began, and I had that moment in my mind.

There is something very special about an adventure based on real discovery, not just to satisfy a checklist or occupy some time. There is a seriousness about it, a contribution to science, a cataloguing of experiences, and a deep involvement that may be missing in many safaris today. It is an expedition.

So today, we are announcing a new experience from Great Plains.

Great Plains Expeditions, starting in Botswana, will connect to the routes that two extraordinary men followed. First, David Livingstone, as he headed north trying to convert as many people as he could find to Christianity. He was less successful in that department with only one true convert, but he did get to name the Victoria Falls. And the other, Fredrick Courtney Selous, as he trudged through our Selinda area and very nearly died of thirst here.

Our perfect version of a Botswana Expedition experience begins in the Duba area, starting at our base camp (Duba Explorers). We discuss the journey, stock up, look at maps and plot the expedition. We then head out on mekoro, the dugout canoes famous in Botswana’s Okavango. The last time we did this, the mist hung over the water, reluctant to give up its ghostly character to the crisp apricot sun while lechwe waded through the shallows. The silence is like a precious jewel and makes you want to bottle it to take home. But you are home here. This is the place where ancient humans walked. We then connect to a small track aiming due north with our expedition vehicles awaiting to explore the western, undiscovered areas of the Selinda Reserve over four nights with you.

This second element of our Expeditions offering includes a scientific phase. We transfer to vehicles equipped for the expedition with only four seats, each with a camera or counting mount, binoculars and notebooks, everything we need for our mission. And that mission is to count elephants, hippos, log the GPS coordinates of dens, pangolin sightings, nests of large raptors, and note all elephant carcasses according to the MIKE format. Elephants, for example, die naturally and their presence remains as bleached bones. We need to register these sites to fully understand the area and levels of both natural and unnatural mortalities.

Expeditions were always our way of going to the edge of discovery.

We will have sextants as a reminder of how explorers of old navigated this wild place among our equipment. The style of the camps will be inspired by the golden era of expeditions, the early nineteenth century. But you will also have a private chef and expert staff on hand. Our communications (satellite phones and radios) make it safe and seamlessly supported.

The route is designed to connect the Okavango and the northern river systems up the Selinda Spillway through one of the highest densities of elephants in Africa. We did a film on this some years ago (Soul of the Elephant), and it connects two areas that are, in my opinion, the most special in Botswana. Still, it transports the traveller through an area that has some of the largest buffalo and elephant herds we have seen, through sable antelope and roan antelope areas, and well… who knows? It’s an expedition. That’s the point; we just don’t know!

The Great Plains Expeditions will bring you back to my origins, our origins, and drawing from our best memories of that era but in style and safety, as an exclusive journey of discovery.

Perfect moments for when the elephants gather.