This Watch Wednesday we celebrate giraffes 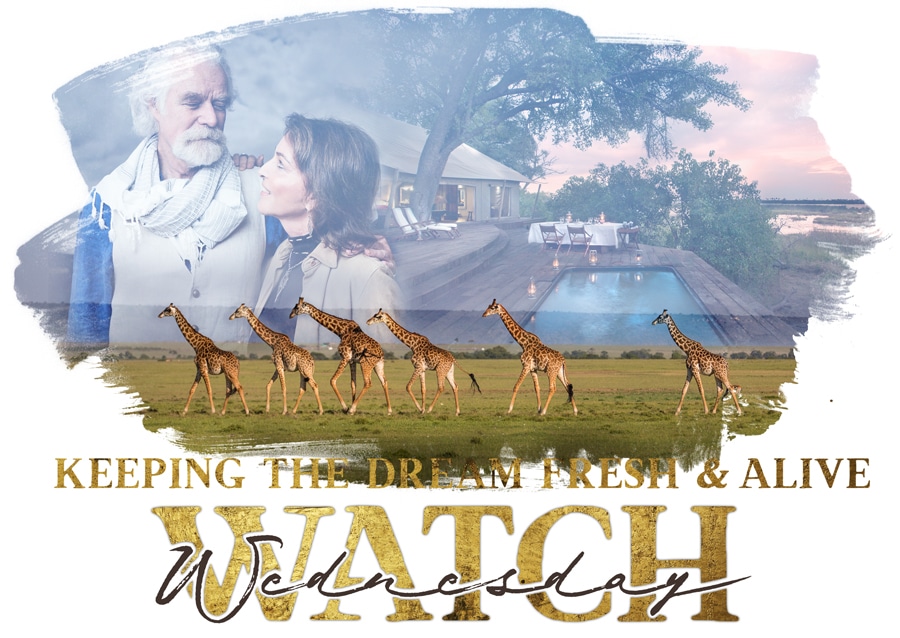 I fell hopelessly in love with a medium height brunette decades ago. Beverly and I never looked back, but I must confess to also having an eye for tall blondes over the years.

Blondes of a particular style and look, with that special, graceful walk and seductive flutter of eyelashes, the embodiment of seduction, quiet and with the poise of a ramp model but much smarter! Legs that go all the way up, as they used to say, and the ability to crush you with a discarding glance as they turn away.

Julius Caesar fell in love with one in 46 BC (although I generally think he made bad choices when it came to love! Choices that gave him frown lines and a few knife wounds in his back). But in this case, he was right.

They inspired the name of our Zarafa Camp in Botswana. They inspired a friend of ours, Lynn Sherr (journalist and famous presenter for 20/20 on ABC), to write a book titled Tall Blondes and why we at Great Plains Conservation look forward to celebrating World Giraffe Day each year.

The story of Zarafa is interesting.

In 1827 Mohammed Ali, the emperor of Egypt (not the pugilist), sent a gift to King Charles X in France, an epic journey that I researched thoroughly before building and naming the camp.

Another good book to get is Michael Pallin’s Zarafa.

This ‘gift’ travelled from the then Nubia down the Nile River on a dhow-styled boat adjusted to accommodate the long neck. It is why our own Zarafa Dhow Suite is built downstream from Zarafa Camp and named the Dhow Suite. We have the art of these dhows in the camp and art of giraffes, most notably a sculpture in the main camp.

In Cairo, this particular giraffe was nearly kidnapped in a thwarted attempt. I am still unsure what the market was for a used giraffe and how exactly they planned to have her just ‘blend in’ following her theft. She was transferred from the dhow to a larger ship and, following her arrival in Marseilles, walked to Paris. Along the way, she captured the hearts of the French people who turned out in all kinds of weather to see and ask about her.

Hassan, the man tasked with delivering this gift to the King, spoke of The Beloved One, “Zarafa”, and of course, the French added their own flare and turned it into Giraffa! Which we then believe later became giraffe. They also called her La Bella Africaine, “The Beautiful African”, but I am quite pleased that the name that actually stuck, in the end, was Giraffe. While I detest seeing animals in captivity and people interacting, touching and handling wild animals, Zarafa (the giraffe) changed the world in her own way, I suppose. Our own fantastic Zarafa Camp changes the lives of those who visit us there but differently. One where we come & see, but don’t touch and leave the world visited but untouched, taking it away only in our hearts.

It won’t surprise you that some countries still condone giraffe hunting and actually find people who want to indulge themselves by killing them, even though there are probably only around 50,000 of these beautiful creatures left in the wild. There are no real bounds to our inhumanity as humans.

This week our love affair with all giraffe, often a silent one, continues and coincides with Zarafa Camp reopening in Botswana, with new makeup and colours, bathed and refreshed and awaiting your seductions.

Thank you all for caring as profoundly as we do about these things.

Change may be slow, but it is steady.