This Watch Wednesday We Celebrate Our “Lionesses”

By GreatPlainsCons10th Mar 2021May 25th, 2021Watch Wednesday
No Comments 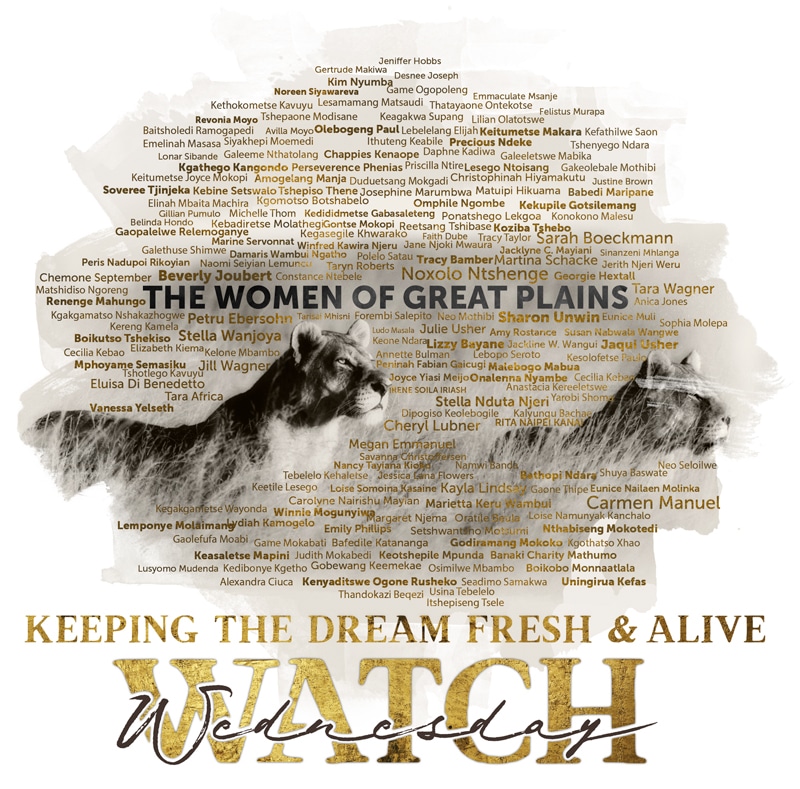 For the Love of Women

Many years ago, I fell in love with a woman who also happens to be the ‘toughest person’ I know.

Beverly embraces Africa’s heat and dust, its challenging conditions, and occasionally being turned over by a buffalo. She’s loved living in the back of our filming truck, working long nights and having slow days waiting for lions to move. Beverly and I, as natural history filmmakers, have seen many male film crews in our world beg to go back to air-conditioning under these conditions. In fact, one of our assistants, after spending a week downwind of a rotting elephant kill during the filming of Ultimate Enemies, offered to pay for his own charter to ‘Get me out of here!”. It’s not for everyone. But perhaps being a woman is not about being a feminine version of a man.

We celebrate women for what they are,
who they are, and what they may
want to become.

As a result, I keep an eye out in Great Plains for other women heroes to help them through the system and make sure they have equal opportunities at every level in our operation. I call these leaders our “Great Plains Lionesses”. Their role is to lead and remind me if we are not living up to our credo to protect and honour women, ensuring they receive equal salaries for jobs and uncapped opportunities. Leaders? Perhaps but actually, every single one deserves that opportunity.

A few years ago, we followed a lioness, an incredible lioness who best epitomized these Great Plains Lionesses.  I want to tell you her story.  She was slammed to the ground during a buffalo hunt and so severely injured that the pride had to leave her for dead eventually. Over the next few weeks, she withered away to almost skin and bone and, when she did move, we could see that her shoulder and ankle had been smashed.

It happens in nature.

But then, she opened her eyes. And what we saw in those eyes was a certain spark, a will to live. It gave us hope. She mobilized those shoulders and went to the river, limping to the water, and she spent days in and out of the new flood as if it had therapeutic qualities or at the very least eased the weight off her leg. Days later, she was limping further afield, always with a skew foot, trying to hunt, but everything she looked at ran way too fast for her. Lechwe bounded away, displaying their fitness, a sharp contrast to her broken body.

She searched everywhere, but on each foray into the swamp, she got healthier, stronger, getting closer to the famously abundant prey at Duba Plains, even swimming to them when she had to. At this point, we named her Feeketsa, meaning “Overcoming a challenge.”

Months later, as we followed her, addicted to her progress, perhaps associating her wounds with Beverly’s, she focused on an adult lechwe and hunted…

Another ‘lioness’ is Lizzy Bayane, a camp manager who ran Duba, Zarafa, and Selinda for us over the past decade. She is also back (in the office) this week, just like Feeketsa, fully recovered, having overcome her own challenge with cancer. So, we celebrate Lizzy today.

As I look at our teams across Botswana, Zimbabwe, South Africa, the USA, Brazil, India, and Kenya, and including as many of their names as we could in the art above, I am overwhelmed with gratitude and appreciation for them. All women.

One lingering sadness, of course, is that there is even a need for Women’s Day. Ridiculous in this day and age, where we should celebrate everyone equally, or that we have to collectively point out that we need to celebrate women and the injustice they often endure across the globe.

It’s time for these lionesses to stand on their terms. Until there is no more need, we celebrate our “Feeketsa Lionesses at Great Plains”, although to be frank, there will always be a need to celebrate women – hopefully not as a reminder of the injustice, but out of love.

The cream-coloured canvas tents at Mara Nyika are

A resident pack of Wild Dogs encountered a herd of